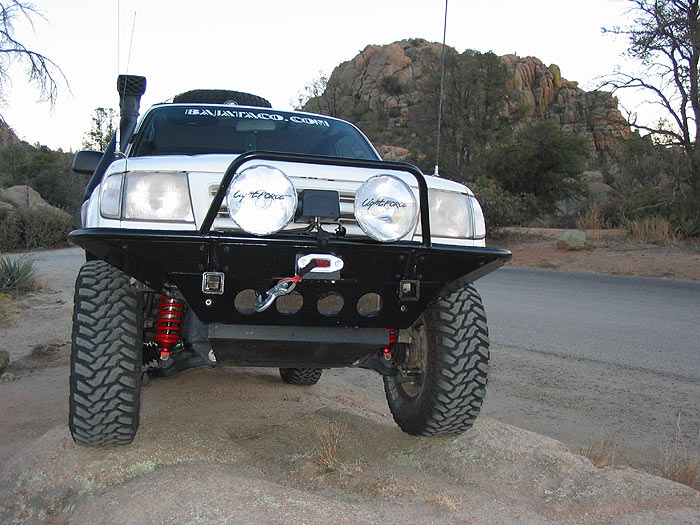 I'm not sure how making decisions on a bumper could have been so difficult, but they were. From stock, I went to a fairly simple kind of arrangement that I call a "bash plate". To see the original creation, click here. It utilized the top half of the stock bumper, but gave me some good radiator protection, recovery and jacking points, and the all-important approach angle. This served me well for a long time, but eventually, the remaining portion of the stock bumper started to show it's age and all of the abuse I had given it. It was no longer straight, and was not doing much to protect the corners of the truck. So I decided it was time for something different. I had always admired the ARB bullbars that hail from Australia's Outback, and was happy when an opportunity came along to try one out. I mounted the ARB up and used it for about 7 months. My biggest problem with the ARB bumper was the loss of approach angle when compared to the bash plate that I had previously mounted. The ARB bumper was also much heavier than my previous setup and the difference in the way the truck felt was apparent to me. So at that point, I decided to do something different. I really liked my old bash plate bumper so much that I figured it would make a great foundation for something new. That would eliminate a good part of the design and fabrication work also. My goal was to come up with something to replace the area where the upper part of the stock bumper used to be, and also incorporate some other design aspects. One thing I really liked about the ARB bumper was that I could stand on it and the top plating also made a nice surface to set things on. I also wanted some kind of way to cover up the "guts" of the front of the truck, like the ARB bumper did. This would keep these items better protected from debris, mud, rocks, and also work well to hide them from sight. A friend of mine recommended a shop, Nichols Auto Fab in Prescott, Arizona. I made arrangments to meet with Kevin Nichols, and we discussed some ideas. This is what we came up with:

on to Part II